The Chinese Garden of Friendship is a tranquil retreat in the middle of the city, and one of the best things to do in Sydney.

Located in the southern end of Darling Harbour, nestled between Darling Quarter and Darling Square, the Chinese Garden of Friendship is a collaborative effort between Sister States of NSW and Guangdong of China.

Opened on 17 Jan 1988 for the Bicentenary, the Garden was modelled after ancient private gardens in China from the 5th century and is a masterpiece of traditional Chinese culture infused with Australian characteristics.

Designed by the Guangzhou Landscape Bureau, the Garden was laid out according to the ancient Chinese philosophy of Taoism and its principle of Yin and Yang and imitates the setup of traditional Chinese landscape paintings of miniature mountains and water.

Come in and treat yourself to our hectare of peace and tranquillity. Wander serene pathways and take in exotic plants, blooming flowers and a lake of shimmering Koi. If you fancy staying for a while, experience The Gardens by Lotus, an onsite restaurant in a heritage listed teahouse serving dumplings, Chinese tea and fiery Sichuan cuisine.

Subscribe to our newsletter to be the first to know about what's on in the Garden.

*child under 5 free of charge

View the Conditions of Entry

The Chinese Garden of Friendship is open to all visitors in line with current NSW Public Health advice.

The health and safety of the Garden’s visitors, staff, animals and of course the broader community remains our top priority and we have taken steps to ensure the Garden is a safe place to visit.

Our site is proudly COVID-Safe and complies with all current NSW Public Health orders.

In line with current health advice, we strongly encourage visitors to wear a mask when they can't physically distance outdoors.

Accessibility
Pathways and pavilions in the lower garden are accessible for wheelchairs, buggies and prams; however steps and rocky pathways make the upper part of the Garden difficult to access. The closest passenger drop-off point to the garden is on Harbour Street.

The Chinese Garden of Friendship was built to symbolise the friendship between Sydney, New South Wales and the city of Guangzhou in the province of Guangdong, China (sister cities of sister states) and was formally opened as part of Australia’s Bicentennial Celebrations on 17 January 1988. The Dragon Wall, featuring two flying dragons—a symbol of majesty and perfection in Chinese culture—was a gift from Guangdong; the brown dragon represents Guangdong, and the blue dragon New South Wales.

In a collaborative effort, the Garden was designed by Chinese landscape architects and built by Australian craftsmen and specialists. It follows follows the Taoist principles of 'Yin-Yang', the opposing yet complementary and balanced forces, and ‘Wu-Xing’, the five elements or phases—wood, fire, earth, metal and water. These principles also stress the importance of Qi, the central force of life and energy.

Yin-Yang and Wu-Xing play such a vital role that just one missing element would disrupt the garden's harmony and balance. However, when combined perfectly, the five elements form a fluid and nurturing environment. Everything you encounter in the garden has been carefully chosen and meticulously placed in order to incorporate the five elements, achieve a balance of Yin and Yang, and promote the flow of Qi.

Unlike western-style gardens, there are no formally laid out flowerbeds or manicured lawns; instead, wild aspects of nature are recreated in landscapes that feature waterfalls, mountains, lakes and forests.

The art of Chinese garden design began in imperial parks during the Shang Dynasty, around 3,000 years ago. Later it flourished on a smaller scale in the private gardens of China's rich and powerful, and Darling Harbour’s Chinese Garden of Friendship is a small-scale version of a typical private garden from this era.

Hear the story behind the magnificent Dragon Wall in the Garden

Enrich your students’ cultural knowledge with a visit to the Chinese Garden of Friendship.

Thinking of visiting the Garden as a group and discover what the Chinese Garden has to offer? The Chinese Garden of Friendship is one of Sydney’s most popular destination for gardening groups, heritage clubs, specialty tours and other outings.

The Chinese Garden of Friendship advisory committee was formed in August 2017 to provide independent advice on the long-term planning and strategic management of Garden, helping to inform a 10-year plan for the site.

The new committee brings a wealth of diverse experience across business, arts and Chinese culture and aims to support Government with the holistic management of the Garden by ensuring there is representation from a range of relevant disciplines and communities.

Following an Expression of Interest process, the following members were appointed to the committee:

Dr John Yu
1996 Australian of the Year for his vision to create a best practice paediatric hospital that integrate art, design and high-quality medical care for the benefit of young people and current Chair of Museum of Chinese in Australia.

Lunar New Year in the Garden

Amidst glowing lanterns and lush nature you’ll get the chance to enjoy opening and closing ceremonies with lion dancing, red envelopes with gold coins, traditional tea ceremonies, music performances and Year of the Rabbit Chinese Astrology readings -  there's someting for everyone to enjoy! 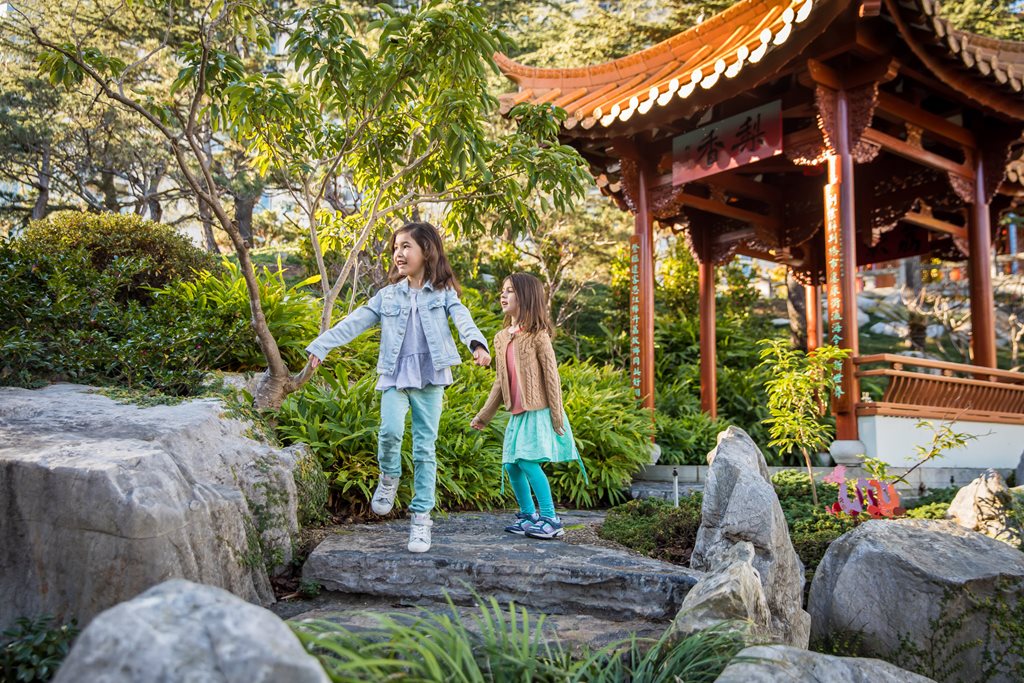 Friends of the Garden annual memberships

The Chinese Garden is a peaceful, beautiful sanctuary in the heart of bustling Sydney. Become a Friend of the Garden to unlock unlimited visits for a year, exclusive events, free parking, dining discounts and more! Or even reward your staff and build culture with our Jade or Gold corporate membership packages.

Enjoy a relaxing Tai Chi session in the beautiful and peaceful landscape of the Chinese Garden of Friendship.

Feed the magnificent koi as they rush through the waters of the Chinese Garden of Friendship to get their lunch.

Bring the kids to the Garden these school holidays where they will learn about the plants, animals and culture of the garden all while having fun in the Junior Garden Master Challenge.

Can you find the 12 animals of the Chinese lunar calendar that are hidden in the Garden?

Join a private tour to discover design principals, landscape and cultural heritage plus many treasures that lie within.

Learn about the history, landscape and cultural heritage of the Chinese Garden. 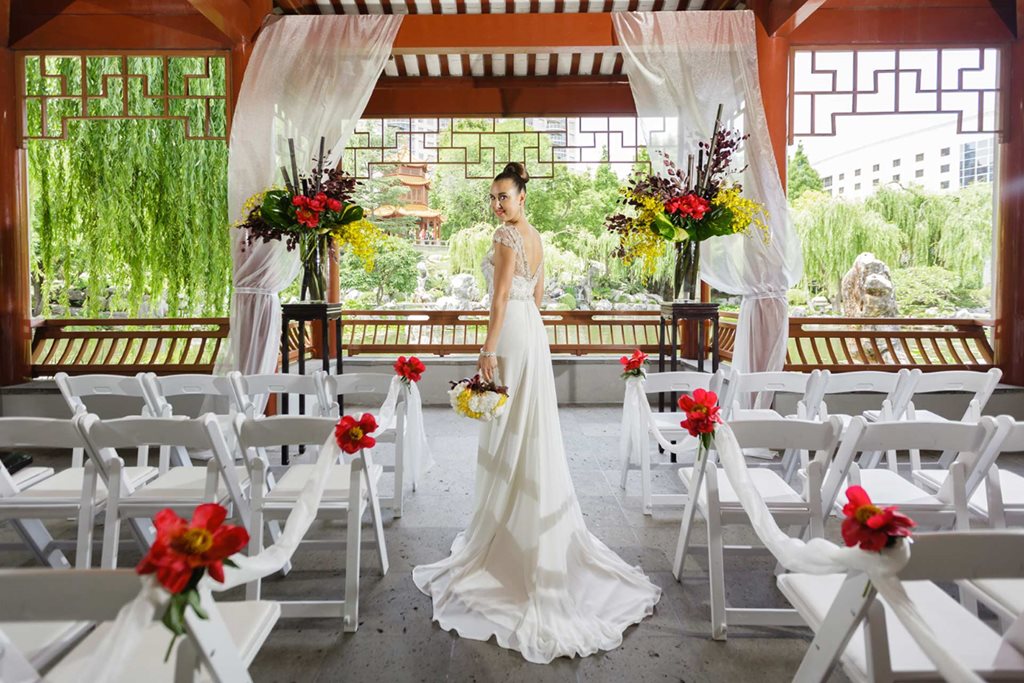 Weddings, Functions, Filming and Photography at The Garden

The natural beauty, architecture and elegance of the Chinese Garden of Friendship at Darling Harbour can provide a unique backdrop for any filming or photography project. Sheltered pavilions, graceful bridges, reflective pools and enchanting landscapes create the perfect setting for wedding ceremonies, birthday parties, cultural activations and many other events in the heart of the city.

The Gardens by Lotus

Located inside the famous Chinese Garden of Friendship in Darling Harbour, The Gardens by Lotus is an exciting Chinese 'Teahouse' style dining and events space.

The Gardens menu compliments its location, offering a contemporary interpretation of a traditional Chinese cuisine, as well as a weekend Yum Cha menu. Guests can expect to see traditional Chinese dishes with a sophisticated and innovative twist. On offer hot from the woks are dishes such as Sichuan style prawn & pork wontons, steamed pork ribs with black bean sauce, and Lotus' signature spring rolls with king brown mushrooms.

Sign up to our email newsletter to learn more about the living landscape of the Garden.