We scoured old newspapers to bring you the scariest historic tales from Sydney’s favourite harbourside precinct.

Today, a visit to Darling Harbour is one of the best things to do in Sydney. This harbourside hotspot is packed with city’s most exciting restaurants, bars and entertainment. But centuries ago, the precinct was a place known for grisly murders and ghastly accidental deaths.

We searched historic newspapers to bring you 8 of Darling Harbour’s most gruesome historic stories and the familiar locations where they happened - perfect tales to tell by candlelight and freak out your friends on Halloween. Or, if you're feeling particularly brave on Halloween night, bring a torch and your wits and visit these sites to see if you can spot any of the ghostly spirits passed.

WARNING: before you read on, know that these tales feature death and dismemberment. They are not for the faint-of-heart!

In the mid to late 1800s, Darling Harbour locals had a frightening habit of dying by accident in the most grisly ways: from being sucked into ice saws to being swallowed by Great White Sharks. These are their stories: 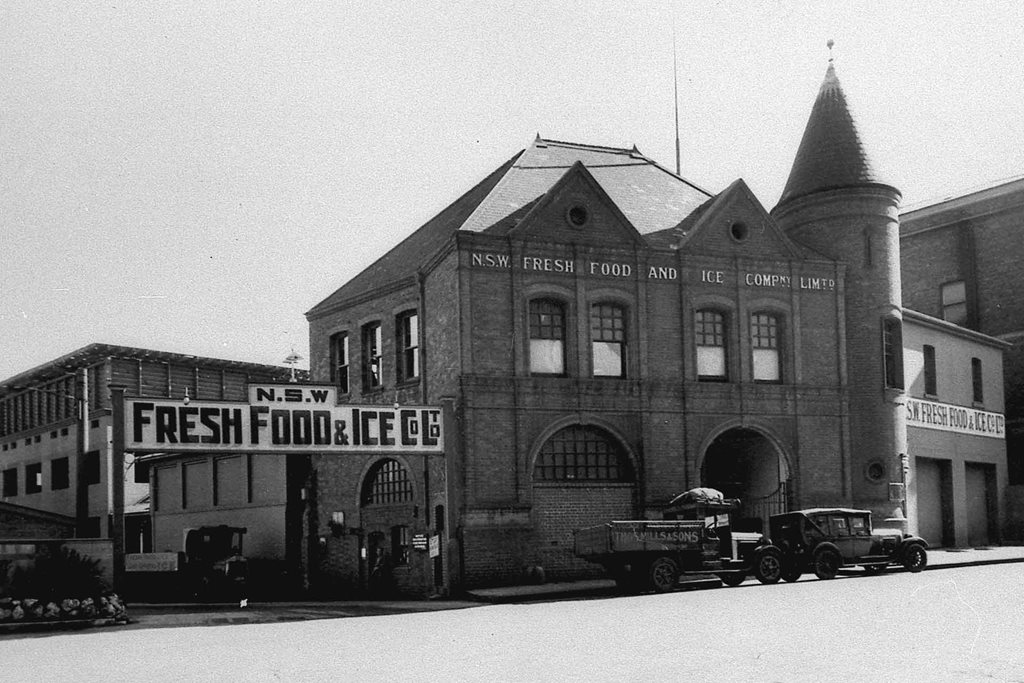 In 1861, the world’s first ever freezing works opened in Darling Harbour on the site where the most boo-tiful retreat in the heart of the city, the Chinese Garden of Friendship is today.

The New South Wales Fresh Food & Ice Co. was a fantastic success but it was also the site of several grisly accidents, one of which occured on Friday 8 May 1898. Shortly after 11am, two men were rolling an ammonia cylinder along the ground when it suddenly expanded, causing a powerful explosion.

The two men rolling the cylinder were hurled to the ground and scalded by the explosion, along with four others. Their expensive draft horses nearby were killed instantly. Meanwhile, the fumes rendered all the surviving men unconscious.

They were rushed to hospital and five of the men survived but with severe burns however one man could not be saved.

This is a tale that could have come straight out of a scene in a classic Halloween horror movie...

After the explosion mentioned in the story above, the NSW Fresh Food & Ice Co. enjoyed a long period without any horrific accidents but that was short-lived. In April 1900, the Bubonic Plague had begun to ravage Sydney and Darling Harbour so probationer Frank Evans was patrolling outside the quarantine zone. At around 7am, the freezing works opened and Frank spotted the ice blocks being cut by giant electrically powered saws and was curious about how it all worked.

He was wearing his yellow regulation raincoat and cape and when he leaned in to inspect the saws, the wind picked up and drew his raincoat into the saw's teeth, jerking his whole body in with it. Before the freezing works staff realised what had happened, Frank’s torso had practically been severed in two from shoulder to waist. 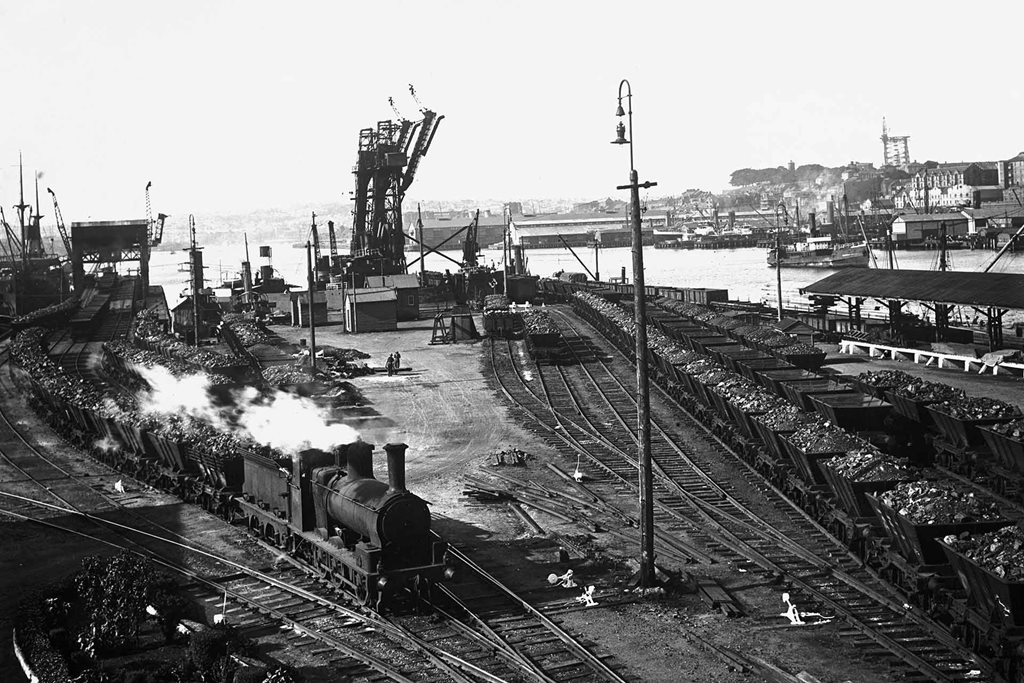 Today, The Goods Line a fa-boo-lous leafy public space with seating, workout spaces, and even public ping pong tables. A far cry away from the old disused rail corridor that connected the old Central Station in Sydney to Paramatta Junction from 1855, until the last goods train steamed out of the yard in 1984. It was here that a railway worker named John Montague met his grim end in an accident on Wednesday 4 May 1904.

John was a shunter - it was his job to move train carts from one track to another to change their courses. He jumped onto the side of an incoming cart intended to shunt it from a weigh bridge to line number 2 when he realised the lines were set wrong.

Before he could change course, the train struck another cart, crushing John between them and killing him instantly. 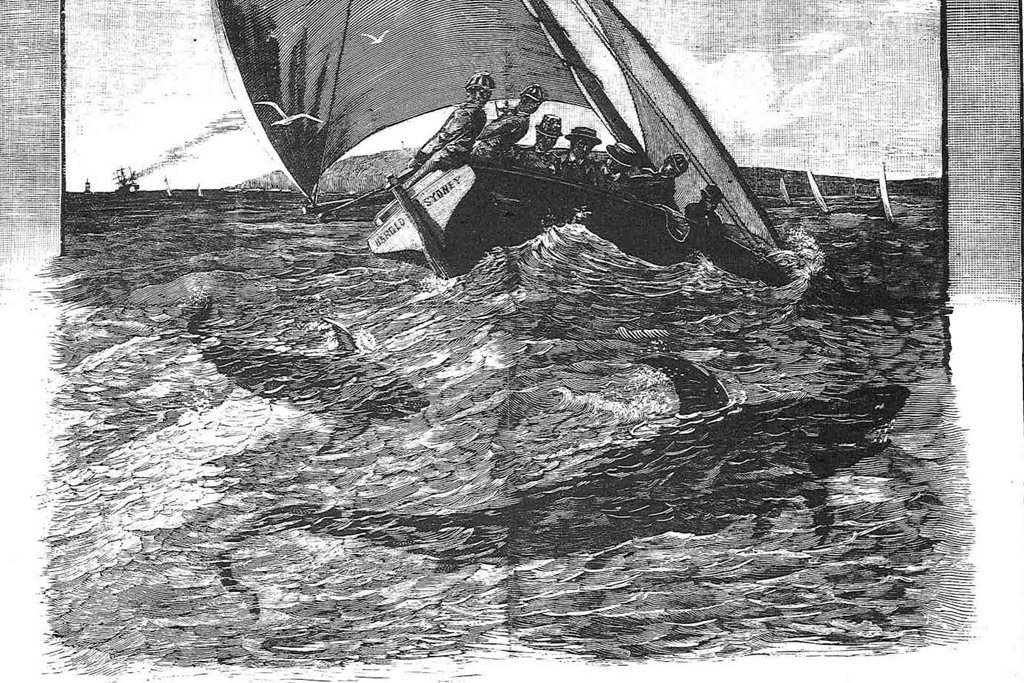 Shark mauling at the Lady of the Lake

What would Halloween be without a token terrifying tale of a shark attack on an unsuspecting swimmer?

Charles Boo-th (name unchanged!) was a keen swimmer and a deckhand on the Lady of the Lake Schooner. Little did he know his fondness for swimming and his service to the Lady would be the cause of his horrifically gory end on a cool winter's day in July of 1879.

On the day, a dingy attached to the Lady of the Lake broke loose in Darling Harbour so Booth decided to dive in and swim after it. He dived in and paddled to the boat but when he was inches away he was pulled underneath.

Police could not find his body until later when a local shoe maker noticed something floating in the water and jumped in his boat to investigate. He looked underneath and saw a huge shark frantically devouring Booth’s body. When police finally recovered his remains the post mortem found his shoulder almost completely severed from his body, and the muscles of his thigh and arm torn away by shark bite.

Check out the spooktacular selection of things to do in Darling Harbour this Halloween.

We've carved out loads of freaky fun things do in Darling Harbour this Halloween! There's delicious eyeball cocktails, ice-cream head desserts, free face painting and pumpkin carving, freaky events and more! So pop your vampire fangs in and creep down to the harbour - we’ll be waiting for you…

The Souls of Pyrmont Bridge

Opened in 1902, Pyrmont Bridge is a heritage listed architectural wonder. Replacing a smaller bridge built in 1857, it’s the oldest electrically powered wingspan bridge still in operation. Today, it’s an attraction in its own right but long ago it was the site of several unfortunate accidents and ghastly finds. For a creepy thrill this Halloween, read these stories as you stroll across the bridge then stop and take a moment to see if you can feel Thomas or Henry's presence close by. 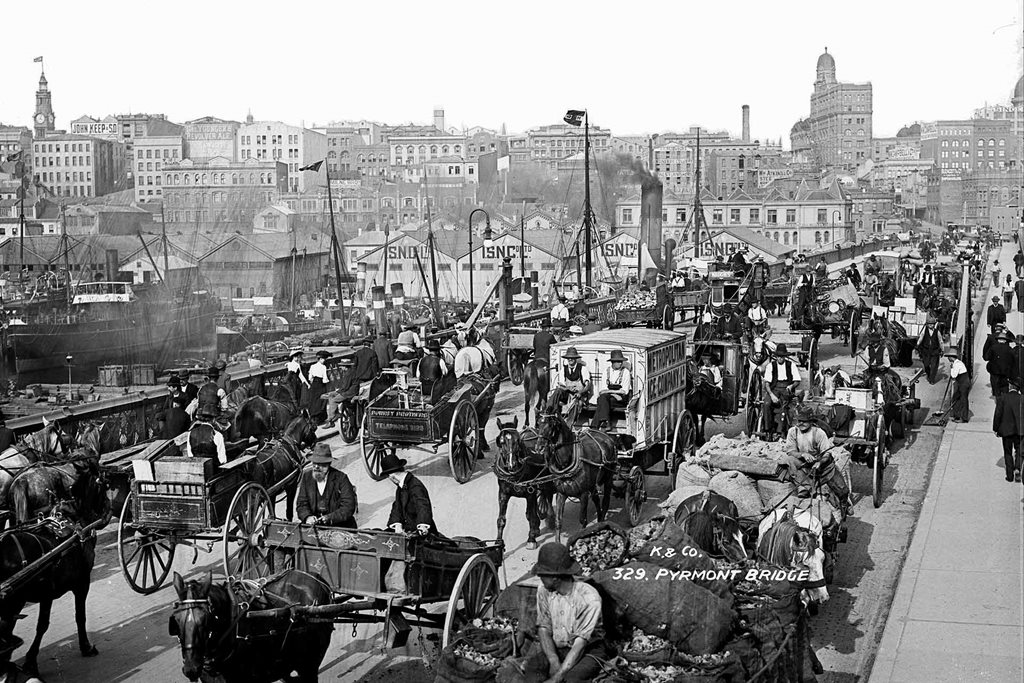 Head to Darling Harbour on a hot day and you’ll see dozens of people enjoying ice-creams and gelatos, and on Valentine's Day in 1897, it was much the same. Little did 50 year old Pyrmont Bridge worker Thomas Risk know that an ice-cream cart would cause his gruesome death.

Thomas was in charge of opening and closing the structure to allow vessels through. He was closing the gate when the ice-cream cart driver tried to pass through, knocking him to the ground where he became caught in the bridge’s moving mechanisms and was accidentally crushed to death.

So if you're strolling across Pyrmont Bridge with an Andersen's ice-cream in hand this Halloween weekend and suddenly happen to lose the top of it, spare a thought for old Thomas - it could be him playing a trick with your treat! 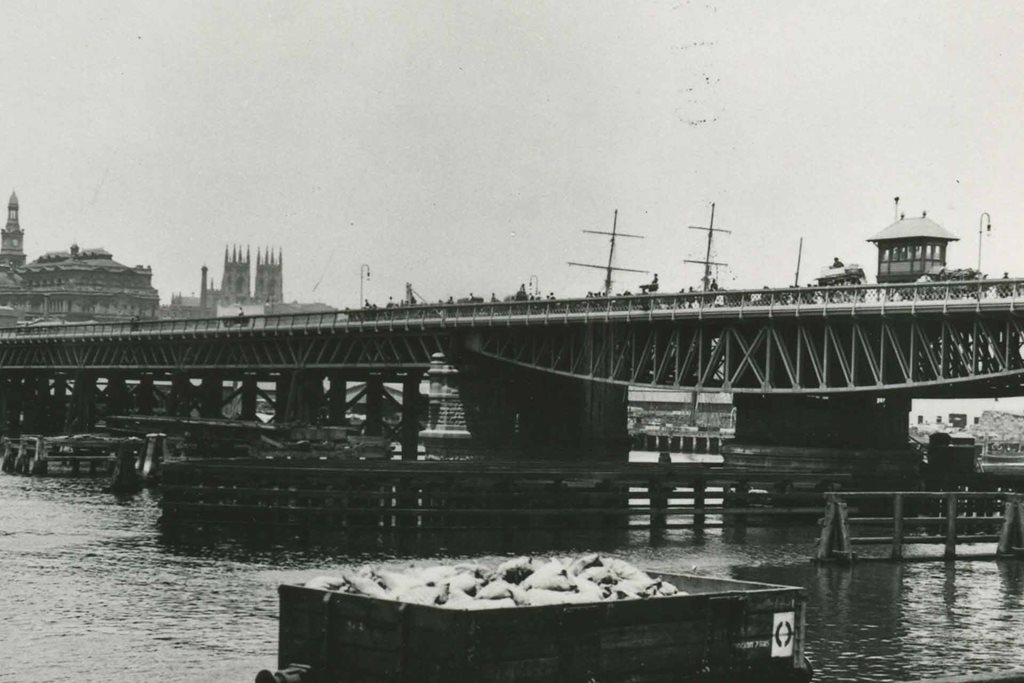 Jumped to death for a $1 bet

We’ve all given into dares and made bets that we regret. But on a boo-zy Monday night in August 1912, wharf labourer Henry Evans made a bet that would end his life.

Earlier, Henry and his buddies left a pub at closing time, feeling worse for wear after too many bevvies. Halfway across the Pyrmont Bridge, a fight broke out and one of the group questioned Henry’s bravery, betting he wasn’t game enough to jump off the bridge for $1.

Henry ignored the protests of his more sober friends, stripped down and climbed onto the railing in his singlet and undies. When his friends tried to pull him back he yelled, "Who’s afraid, I’m not" before jumping into the black waters 38 feet below.

His friends watched as he disappeared under, then floated to the service to their cries of relief. But relief quickly turned to horror when his body rolled onto its side and sunk under the water again, to be recovered by police drag nets an hour later.

Before Darling Square and Harbourside became the home of some of Sydney's best restaurants and bars, several macabre murders marred their reputation. In the 1800s and early 1900s, convicts roamed the streets, unsavoury characters lurked in the night and brutal murders were commonplace. These bone-chilling stories are the stuff of nightmares.

What is dead does not always remain buried. At least, not in this particular case. In January 1866, Sydney Council workers made a grisly discovery while excavating a street where Town Hall is today. Two unmarked coffins. They were close to the site of an old cemetery, but these coffins were clearly buried outside that hallowed ground.

Many wondered who the bodies inside belonged to. What they found was a tale of murder and execution. The corpses that had been dug up were those of two men who had been executed in 1799 for the crime of killing missionary Samuel Clode in the south end of Darling Harbour around the area that is now Darling Square (then known as 'The Brickfields'). One of the murderers was soldier Thomas Jones, after whom Jones Bay and Jones Street in Pyrmont were named after.

Aided by an accomplice, they had split Clode’s head in two with an axe when he came to collect payment of a debt, then buried his corpse in a sawpit behind Jones' home.

Their terrible crime was discovered and they were hanged for it, along with their accomplice Elizabeth, whose body was subsequently dissected by surgeons. 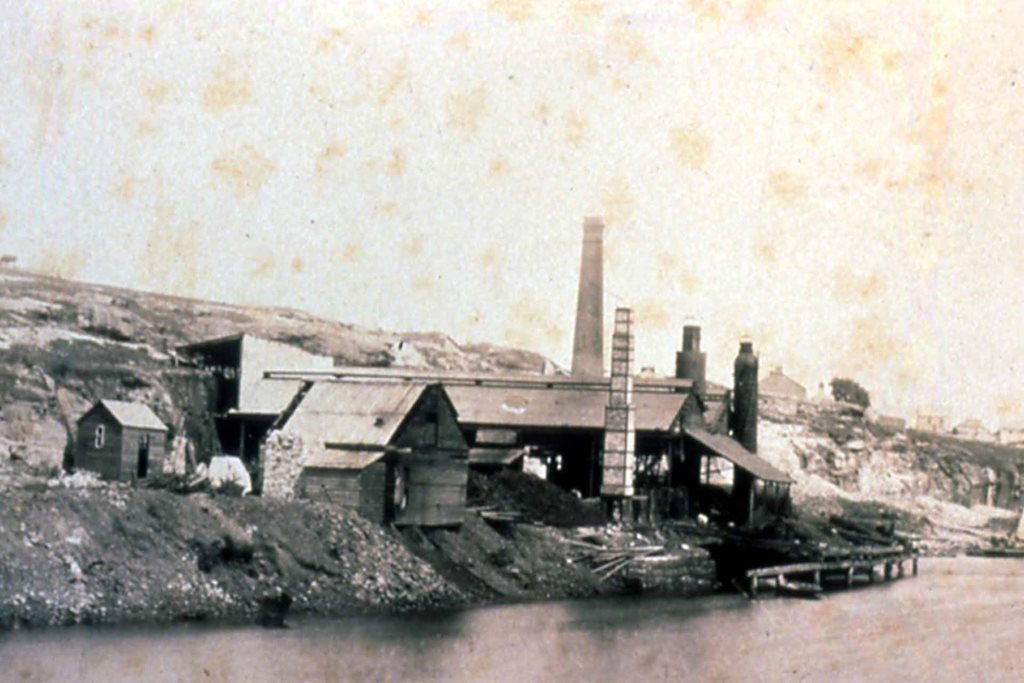 Sundays in Darling Harbour are generally filled with people out and about soaking up the sun and the bustling atmosphere before the week begins again. However, the Sunday of 13 April 1884 was quite different, as a frightful discovery rocked the area.

A shrilling scream was heard across the harbour as the body of a young man was found floating in the waters near the beach at the site of the old Atlas Engineering Works (where the first locally made locomotives were built) and where the Darling Harbour Ferris Wheel stands tall today. The state of the corpse was so terrible that the face of the man was unrecognisable, the skull having been broken in.

It appeared to have been a brutal murder - not only because of the apparent injuries, but the fact that a stone weighing about 5lb had been attached to the waist of the body.

Take a ride on the Ferris Wheel this Halloween weekend and when you reach the highest point, peer into the waters below. Can you see anything there waiting to be discovered?

See what's on at Darling Harbour this Halloween