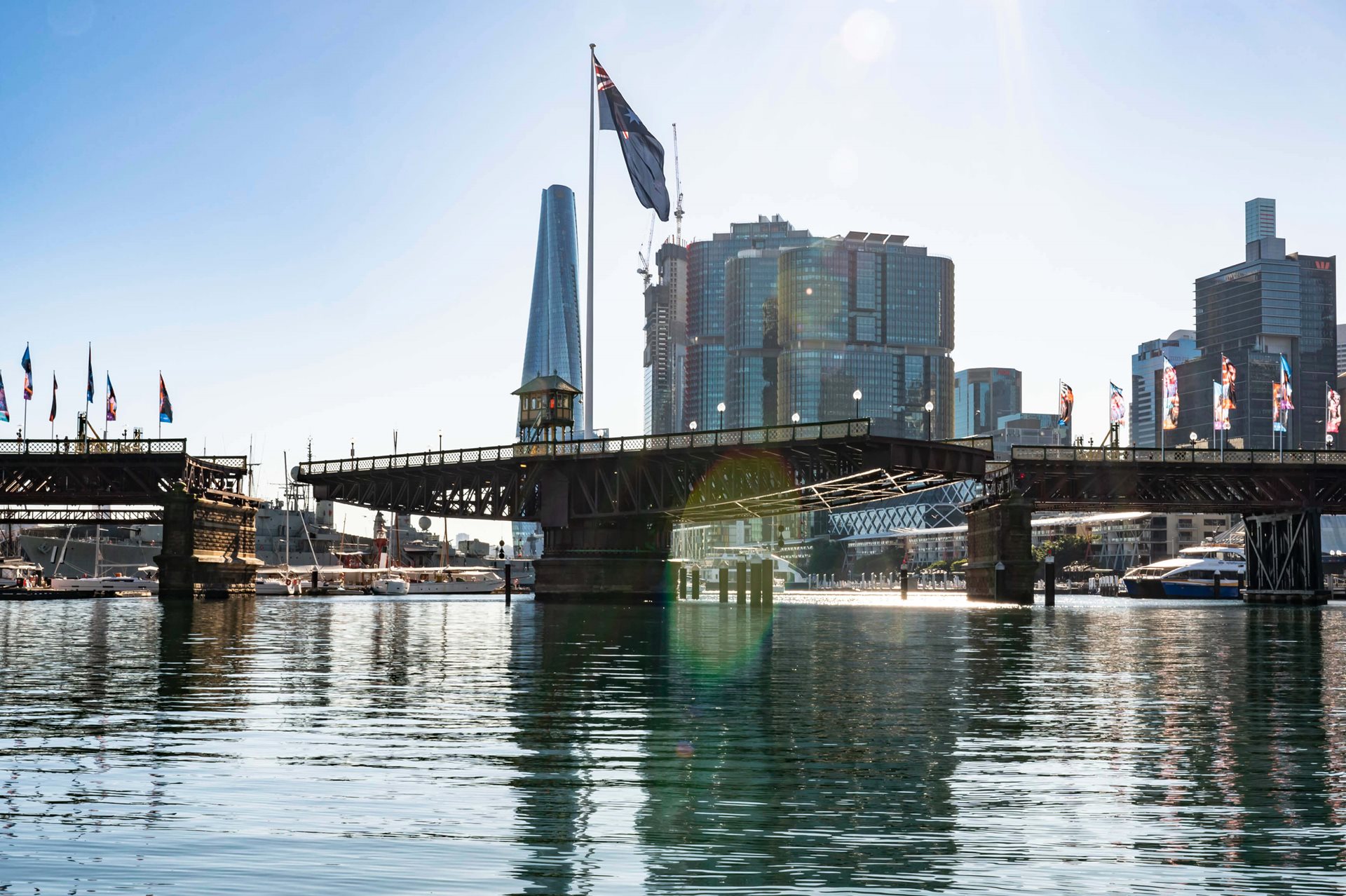 Take the scenic route to cross over Darling Harbour via one of the world's oldest surviving electrically operated swingspan bridges.

A symbol of Australia’s industrial history.

Pyrmont Bridge is one of the world's oldest surviving electrically operated swingspan bridges. The first bridge began operating in 1857 and the current swingspan bridge opened in 1902. The bridge provided the main transport route between the city and Sydney's growing western suburbs while the swingspan allowed tall vessels to access Darling Harbour.

Pyrmont Bridge was designed by engineer Percy Allan who was renowned for his ‘common sense' approach to engineering. Each of the 583 bridges Allan designed during his career was characterised by its economical use of materials, easy construction and maintenance. Pyrmont Bridge consists of a steel truss swingspan with timber truss approach spans. Timber was used because of the high cost of iron and steel and government insistence on using local ironbark to reduce costs.

At the time using electricity to operate the swingspan was considered advanced as almost all swing bridges were operated by winches, steam or hydraulic power. The electrification of Sydney's trams provided Allan with the power and equipment he needed. The Ultimo Power House, now the Powerhouse Museum, was nearby, and tram motors, modified with appropriate gearing, were suitable to drive the swingspan. During the 1900s, the growth of international trade saw the introduction of large container ships and the southern end of Darling Harbour became less commercially viable as a trading port. The area gradually fell into decline, freight services were moved and the railway goods yards were closed in 1984. When Darling Harbour was redeveloped in 1988, Pyrmont Bridge's swingspan was restored and a new addition, the Monorail, was built above it. Place Management NSW, which manages Pyrmont Bridge, has undertaken further remediation work in the past 20 years. This has included measures to prevent the swingspan jamming during hot weather and maintenance of the sand filled concrete encasements which protect the timber pile from marine borers. The bridge is a key piece of engineering heritage and the swingspan has opened more than 600,000 times in its lifetime. An Institution of Engineers Australia commemorative plaque is at the bridge's west end and an inscription in the stonework at the eastern end recognises Percy Allan.

Come and watch bridge in action every Saturday, Sunday and Public Holidays at 11am, 12 noon, 1pm and 2pm.

One of the world's oldest electrical swingspan bridges

Aware Super Theatre
Aware Super Theatre is one of the world's best live entertainment venues which creates a space for our community to come together to be entertained by some of the world’s greatest performers such as Stevie Nicks, Kylie Minogue, Elton John, Jerry Seinfeld and Tina Arena.
View Details
Aussie Water Taxis
Water taxis have got to be the best way to get around Sydney’s famous harbour, and these guys have the biggest fleet in town.
View Details
Australian National Maritime Museum
Discover Australia’s fascinating maritime history and one of the world’s largest collections of floating museum vessels.
View Details
Darling Harbour Children's Playground
If you’re looking for things to do with kids in Sydney, you’ve just found the ultimate option.
View Details
Subscribe for events, guides & offers
Subscribe No Thanks