Lunar New Year at the Garden 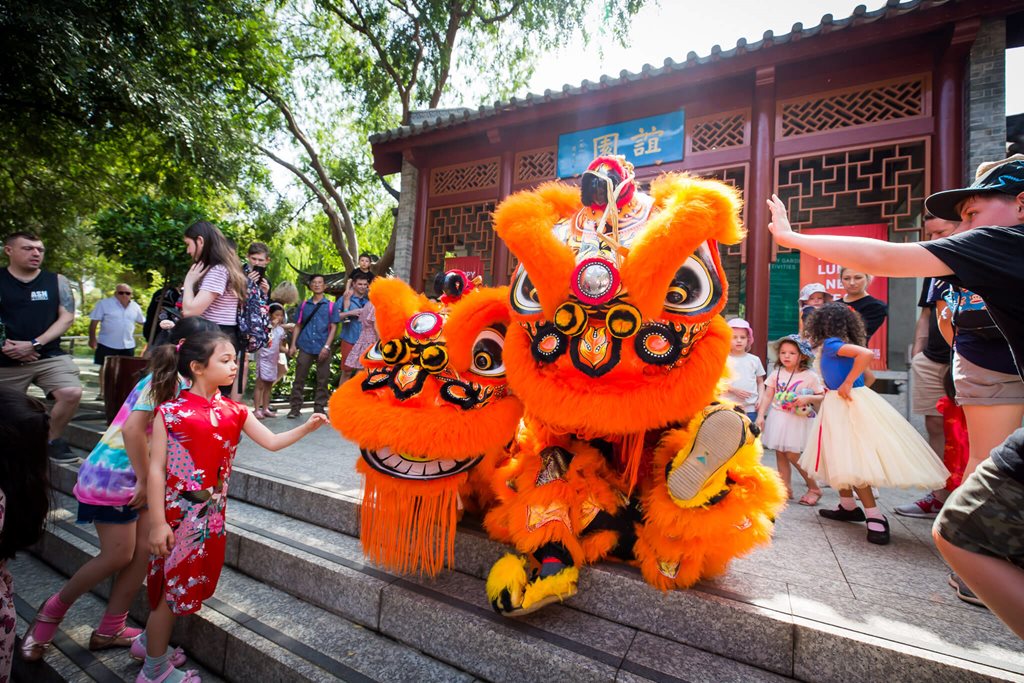 Australian Pipa Association promotes Chinese musical culture in Australia by providing a platform for pipa performers of varying abilities, ages and cultural backgrounds and developing their skills in ensemble performance. Their repertoire includes an extremely broad variety of music, including traditional Chinese pipa music, contemporary works, Australian and popular Western genres. The APA enjoys exploring and collaborating interculturally to help players develop an awareness of musical style, expression and to understand musical culture and aesthetics at an experiential level. The association, with its flagship ensemble, also promotes musical culture and exchange with a wide range of artists, musical organisations and institutions to help promote pipa education and research. This includes graded exams, pipa competitions, festivals and other events.

Dreambox Collective is a Sydney-based musician and artist collective passionate about understanding how we can live on this changing planet together; producing works and facilitating performances to create meaningful connections for positive social impact. Three Dreambox Collective artists, Chloe Chung, Jolin Jiang and Liz Cheung present intimate and rich works from their latest collaboration “Home”, for Lunar New Year at the Garden.

Chloe Chung is a celebrated cross-cultural flautist, playing Western classical flute and dizi (Chinese bamboo flute), teaching music and collaborating with others to foster unexpected musical forms and connections in Sydney. Her passion for creativity, sustainability and education are central to her work as an active performer, optimal movement coach and creative director. ​A passionate educator, Chloe is currently Academic Lecturer of Flute at AIM (Australian Institute of Music) and teaches dizi at the Sydney Conservatorium of Music. She founded the Dreambox Collective in 2019.

Liz Yung Cheung enjoys messing around with the skeletal sounds of instruments through composing and improvising. They specialise in low flutes and Chinese traditional bowed strings, experimenting with curious noises often within a chamber ensemble or solo setting.

Billy Han 韓君禹 has been playing Chinese wind instruments for more than 15 years starting at age 7. From 2013 to 2017 he was the principal dizi of the Hong Kong Baptist University (Zhuhai Campus) Chinese Ensemble. He came to Sydney in 2017 and has since actively performed with other musicians and ensembles. Billy takes pride in actively introducing Chinese music to the local community, including facilitating workshops in schools such as Hurstville Public School and Newington College. Since 2019, he has been teaching Chinese instruments to develop student interest and appreciation of Chinese music and culture. He is a frequent guest of the Sydney Conservatorium Chinese Ensemble and has featured at the Floriade Festival (Canberra), the Sydney Sacred Music Festival and other events.

Hu Lei 胡磊 is a highly renowned yangqin performer. She studied under the late Professor Qian Fangping, yangqin performer and educator, and was admitted to the China Conservatory of Music with honours in 1983 Chinese yangqin, educator and composer Professor Xiang Zuhua. After graduating in 1987, she became a folk music teacher at the China Dance Academy. In 1989, she arrived in Australia and was invited to participate in many art festival performances and film music recording sessions. Mrs Hu has taught and performed on the yangqin for more than 30 years, and established the "Chinese Style * Music Workshop", focusing on cultivating Chinese teenagers in Australia to learn and inherit the national music culture. Since 2015, she has been teaching the yangqin at the Sydney Conservatorium of Music. Many of her students have achieved high scores in the HSC music examinations. Some have won gold medals in international music competitions and achieved excellent exam results in both China and Australia. Since 2016, she has been principal yangqin in the Hua Music Troupe and has adjudicated the "Talent Family" Australian Youth Talent Competition for Xinkuai Media since 2019. In October of the same year, she led students to represent Australia in the World Dulcimer Conference for the first time. Since 2020, she has served as a member of the Central Conservatory of Music Overseas Grade Examination - Australia Regional Professional Committee.

Hu Weigang 胡卫刚 began his musical studies as a child with his father, the late Mr Hu Haiquan, internationally acclaimed suona (double reed pipe). In 1973, he entered the China Railway Art Troupe with honours at the age of 12 and was recorded for many soundtracks for film TV while receiving many awards. In 1987, Mr Hu graduated from the China Conservatory of Music with honours and became a soloist on the suona in the China Central Chinese Orchestra. After migrating to Australia in 1991, he was invited to participate in the Melbourne International Arts Festival and was engaged in teaching and recording work at Monash University. In 2016, he founded the "Chinese Music Club" with a group of professional performers of traditional music. In 2018, Mr Hu was invited to participate in the finale solo performance of Yo-Yo Ma's Silk Road Orchestra at the Sydney Opera House. He continues to direct the Chinese Wind Music Workshop.

Julia Luo 罗欧思宇 is a teacher and founding director of Sydney Guyun Guzheng Arts Academy. She is also an examiner of the guzheng grading examination system of the Chinese Conservatory of Music. She currently serves as Chinese Music Ensemble, University of Sydney Conservatory of Music Zheng tutor while completing her Bachelor of Music majoring in Historical Performance (guzheng) at Sydney Conservatorium of Music. She has performed at the Sydney Opera House, Sydney city Town Hall, CCTV, SBS, ABC and other large-scale well-known stages and TV programs.

Dr Nicholas Ng 黄建文 is a composer, performer and Research Fellow at the Australia-China Institute for Arts and Culture (Western Sydney University). A former Lecturer (Australian National University) and Research Fellow (Queensland Conservatorium), he began teaching Chinese music and western harmony at Sydney Conservatorium in 2016. On the erhu, Nicholas has toured to festivals around Australia, New Zealand, North America, Canada and Europe such as the KunstenFESTIVALdesarts (Brussels) and Sydney Festival. He has composed for The Song Company, Melbourne Symphony Orchestra and other ensembles. Nicholas works closely with William Yang and Annette Shun Wah and appeared in Double Delicious with Benjamin Law. He has produced a book and various articles on Australia-China exchange. Nicholas established the ANU Chinese Classical Music Ensemble (2003) and curated the festival ENCOUNTERS: China (2010). His work has been documented on SBS Mandarin Radio, ABC Music Show, and in the ABC Compass program, Divine Rhythms. www.nicholasng.com.au

Dr Menglu (Molly) Ouyang 欧阳梦璐 is a member of the Australian Pipa Association and has been playing pipa for more than twenty years. Molly has been invited as guest performers for several local events in Sydney and Chinese Musical Ensemble Concerts and obtained the highest level of the National Pipa Grade in 2015.

Tony Wheeler (clarinet, qin, zhongruan) is a performer, composer, and teacher Tony Wheeler graduated from the Queensland Conservatorium of Music in 1982 with a B.Mus. with Distinction. He spent two years under scholarship (1985-87) at the Shanghai Conservatory studying Chinese composition, ruan and guqin where he received a Certificate of Studies in Chinese music. In 1991 he graduated from the University of Hong Kong with a Master’s Degree in Composition for Chinese instruments. As well as maintaining a busy teaching schedule, Tony frequently performs on Chinese and Western instruments in a contemporary and or improvisatory context, and has played in major orchestras in Australia. He has had more than 20 of his original compositions published by Wirripang.

Ying Liu (erhu) and Dora Maria (violin) is a newly formed string ensemble focusing on cross-cultural diversity and a variety of different musical genres. Sydney-based erhu virtuoso Ying Liu has established an international reputation for her compelling performances and artistic individualism. Ying has performed and worked with many renowned musicians and ensembles across the world including Gerard Willems, Claire Edwardes, Richard Clayderman, Fang Jinlong, Wang Peng, Zhu Changyao and so on.

Dora Maria is an in-demand acoustic/electric violinist and violist with a multi-faceted career across many genres. Currently based in Sydney Australia, Dora studied at the Royal College of Music in London before working as a regular session violinist. Dora has performed and toured with artists including Eminem, Flume, Taku, Sam Smith, Hanson, Michael Bublé, Hans Zimmer, London Grammar, The Stereophonics, Pete Tong for Ministry Of Sound, Peking Duk, Jess Mauboy, The Veronicas, Guy Sebastian, Delta Goodrem, Rai Thistlethwayte, Vera Blue and many more.

* Please note program details are subject to change without notice.