Hendrick’s Gin sought to throw ‘traditions’ out the window, creating and curating a Most Unusual Balloon Bar. A Gin Bar, in a hot air balloon! 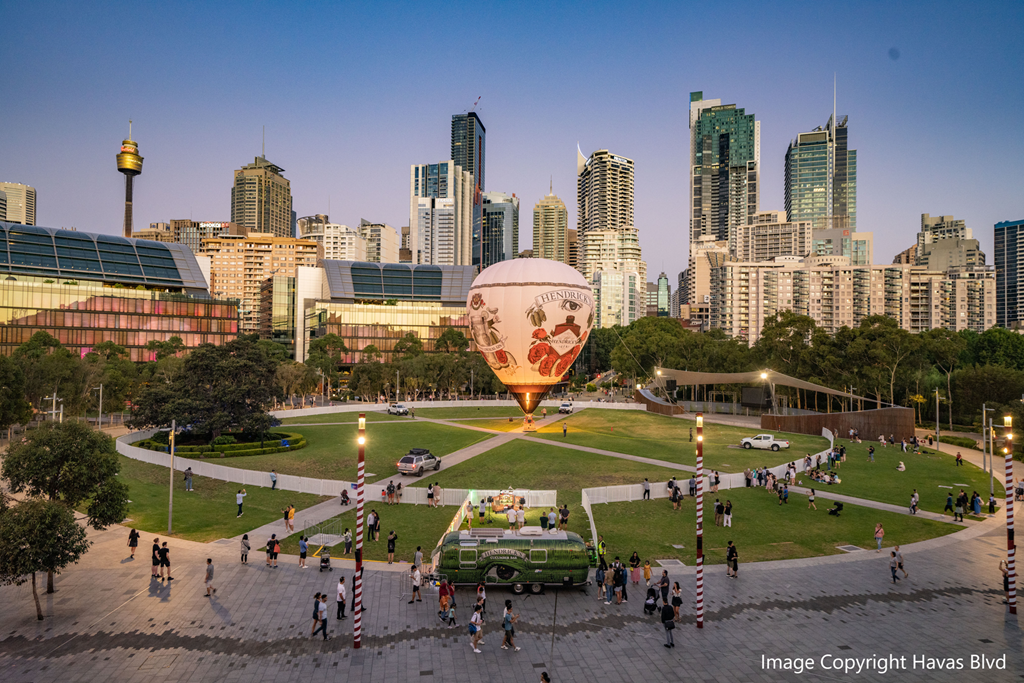 Client Objective: Drive awareness for Hendrick’s Gin ahead of and during Summer 2020/21 by creating and establishing the brands distinct ‘unusual’ persona amongst the target audience (25-35 yo) in a Sydney central and high footfall location.

Rationale for location: In order to launch The Most Unusual Balloon Bar, Hendrick’s Gin sought an area of land which was large enough to activate a tethered hot air balloon experience - all whilst being in a Sydney central location that was easily accessible to consumers.
The location of the event was key in the wider success of the campaign. As a PR and experiential led activation, Tumbalong Park was a central location which made it favourable for media and influencers to report on.
Due to Tumbalong Park’s high footfall, the Most Unusual Balloon Bar captivated both invited guests and consumers within the area or driving past the area, providing further brand awareness throughout the weekend. To engage passer-by’s Hendrick’s Gin developed the ‘Tini Martini’ initiative which saw promotional staff giveaway martini glasses that could be redeemed for a free Gin and Tonic at participating venues in the Darling Harbour and Sydney CBD precincts.  Due to Tumbalong Park’s central location, Hendrick’s was able to giveaway over 1,500 Tini Martini’s throughout the activation.

Overview: The Australian Summer is a time of great traditions and enjoying iconic experiences. This season, Hendrick’s Gin sought to throw ‘traditions’ out the window, creating and curating an unexpected ritual and spectacle to enjoy the summer in a truly unusual way, with the Most Unusual Balloon Bar.
Kicking off the summer with a bang, Hendrick’s Gin launched an intimate and spectacular experience in the sky. The experience was activated for one weekend (4 -6 December) offering 18 sessions daily, enabling numerous consumers to escape the mundane whilst remaining as an exclusive, must-try activity of the Summer.
The offering was offered as a first in, best dressed experience with a capped number of 20-minute sessions, with registrations hosted on the Hendrick’s Gin website. The experience took place from 3-9pm enabling consumers to make the most of the experience as the days turned to dusk.

Hendrick's Most Unusual Balloon Bar tethered for flights at Tumbalong Park
Subscribe for events, guides & offers
Subscribe No Thanks