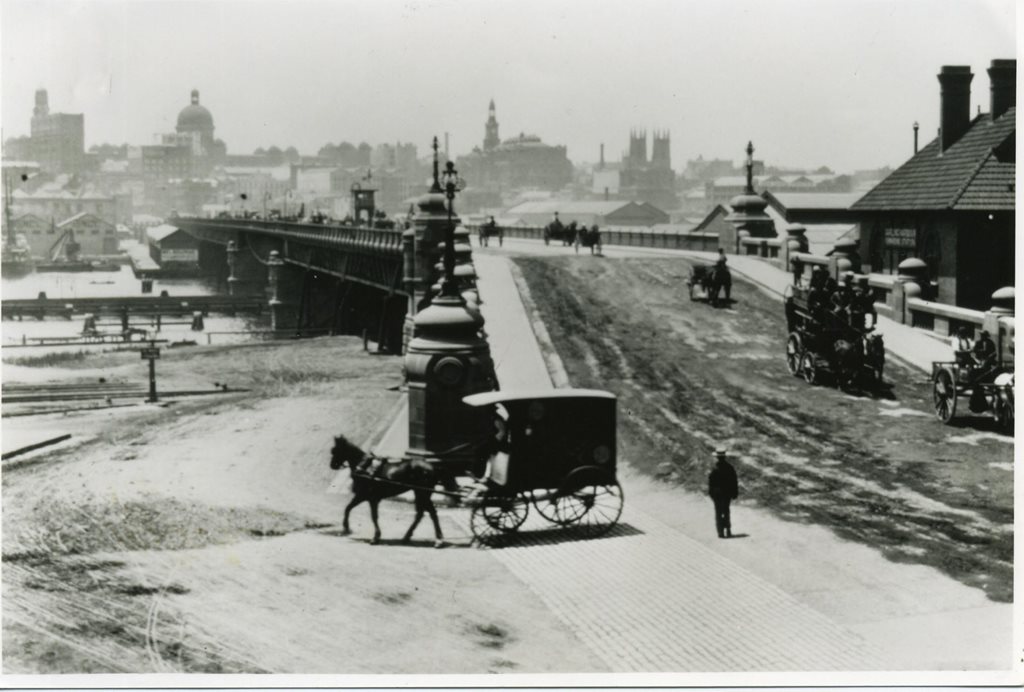 With a rich history that dates back to the nineteenth century, the first Pyrmont Bridge was built in 1857, with its replacement - the bridge that stands today, constructed in 1902. Costing an impressive £112,500 to finish, Pyrmont Bridge stands at an impressive 369 meters long, and the swing span alone weighs an enormous 1000 tonnes.

One of the oldest surviving electrically operated swing span bridges, Pyrmont Bridge is probably the best-known work of civil engineer Percy Allan, and it’s believed to have been opened more than 600,000 times.

To mark this special milestone, come and watch bridge opening demonstrations every weekend at 11am, 12 noon, 1pm and 2pm.

Take a walk through through time below and relive the milestones of this impressive slice of Darling Harbour's history...

SLIDE
1858 - The first Pyrmont Bridge made entirely of timber, was built in 1857 and provided access between the city, Ultimo, Pyrmont and Glebe.
c1870 - Just like the current bridge, the first bridge had a swing span which opened to allow ships to enter Cockle Bay which was then a busy port.
1899 - As the inner west expanded, so the use of the old Pyrmont Bridge grew. In 1899, the construction of a larger replacement bridge commenced.
1902 - Specialist carpentry, stonemason, engineering and boiler-making skills were required of the hundreds of workers that built the 369m long Pyrmont Bridge over a three year period.
When the Bridge was formally opened in June 1902, thousands crowded here for the event. The Governor, Sir Harry Holdsworth Rawson, and the official party stood on a platform erected on the central span.
1902 - The police had great difficulty restraining the eager public prior to the cutting of the ribbon by the Governor's wife, Lady Holdsworth-Rawson.
1902 - Traffic lines up at the gates soon after the Bridge was opened. The old Pyrmont Bridge can be seen on the right. It remained in place directly to the north and was gradually dismantled over the following months.
c1900s - The design incorporated the 'Allan Truss', developed by the NSW Engineer Percy Allan and adopted in bridge construction around the world.
1902 - Powered by electricity from the Ultimo Powerhouse (now the Powerhouse Museum), the swing bridge could be opened and closed in 45 seconds.
1902 - Perched above the bridge path and still operating today, the historic Pyrmont Bridge control cabin has six old tram-like control "handles" to apply power two 50 hp tram motors and "keys" to open and close the span - that have changed little since General Electric installed them 120 years ago.

SLIDE
c1900s - Wool and other produce was transported back and forth across the bridge from the stores in Pyrmont and Ultimo to the wharves of Darling Harbour.
1934 - The growth of international trade saw the introduction of large container ships and the southern end of Darling Harbour became less commercially viable as a trading port.
1982 - Darling Harbour gradually fell into decline as freight services were moved. The Pyrmont Bridge eventually closed to vehicular traffic in 1981.
2010 - Darling Harbour was redeveloped in 1988 and the Pyrmont Bridge re-opened to pedestrian traffic with its swingspan restored to full working order and a new addition, the Monorail was built above it.
2022 - Following the end of the monorail's 25 years of operation in 2013, the track was removed from the bridge. Today, the Pyrmont Bridge remains as the world's oldest surviving electrically operated bridge still in operation. Thousands of residents, visitors and workers stream across it daily, following the tradition started in the 1850s.