As one of the most innovative vocal groups of all time, Pentatonix reimagine and redefine a cappella. Since emerging in 2011, the three-time GRAMMY Award-winning and Daytime EMMY Award-nominated vocal quintet — Scott Hoying, Mitch Grassi, Kirstin Maldonado, Kevin Olusola, and Matt Sallee — have reached unprecedented heights, topping charts, selling 10 million albums worldwide, generating billions of streams, and performing all over the world.

Their single Hallelujah was met with international acclaim, and their catalogue boasts back-to-back #1 albums on the Billboard 200, namely the gold-certified Pentatonix and platinum-certified A Pentatonix Christmas. They notably made history as “The first a cappella act to win ‘Best Arrangement, Instrumental or A Cappella’ at the GRAMMY Awards” in 2015 and 2016. A year later, they earned another GRAMMY Award in the category “Best Country Duo/Group Performance” for their duet with Dolly Parton on her song Jolene.

Pentatonix most recently released their sixth holiday album, Holidays Around The World, via RCA Records, featuring the single Prayers For This World and Kid on Christmas with Meghan Trainor. The record consists of stunning renditions of seasonal staples as well as show-stopping original international collaborations, living up to the promise of its title and speaking to audiences around the globe.

Along the way, the collective also graced hundreds of stages, have performed for fans and notable faces, and collaborated with musical icons including Kelly Clarkson, Dolly Parton, Miley Cyrus, and Lindsey Stirling. Pentatonix leapt onto the big screen with a cameo in the blockbuster Pitch Perfect 2. Following the 2021 album Evergreen, which tallied over 100 million streams, they launched one of their biggest tours to date, Pentatonix: The Evergreen Christmas Tour. In 2022, it was announced that the group will be receiving a star on the Hollywood Walk of Fame.

There’s no better time to see Pentatonix as they reach their highest peak yet. Don’t miss out as they return to Australia for the first time since 2020. 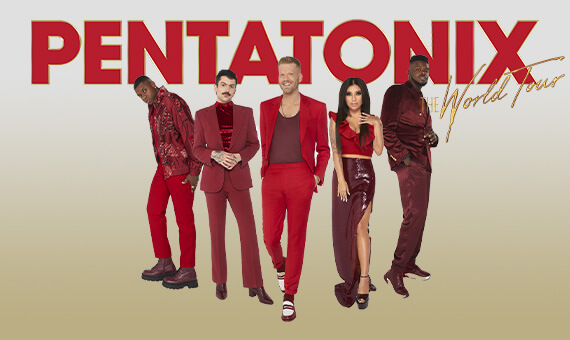