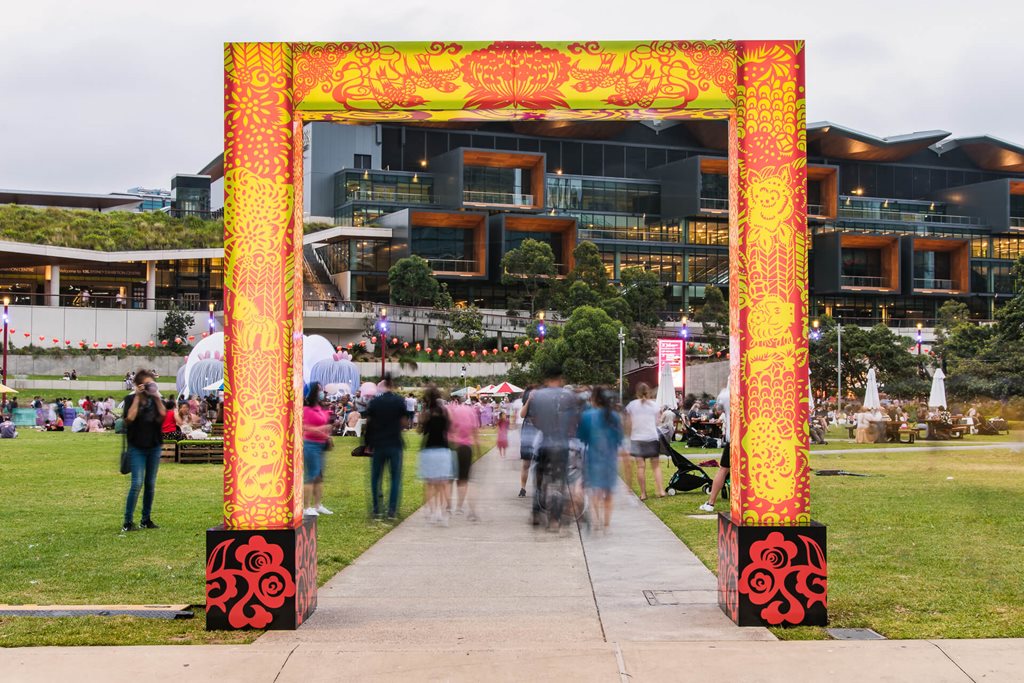 Visit the Civic Connector at Darling Quarter from 21 Jan - 5 Feb and you’ll enter through one of two magnificent, multi-coloured gateways designed by contemporary Asian Australia multimedia artist Tianli Zu, embracing the harmony of nature and humankind; the Sun and the Moon; male and female; heaven and earth; the air and water; day and night; Yin and Yang.

What do the gates represent?

The traditional gateways (Pailou) originated in China in the Zhou Dynasty (c. 1046 BC – 256 BC) and have been introduced and developed in East Asian and Southeast Asian countries. Each archway contains rich connotations and holds symbolic meanings.

Find an integration of Chinese culture and Australian experiences within the artwork. For example, the magpie is an Australian wild animal, and it means auspicious according to Chinese tradition. It is affectionally called the bird of good luck as it announces good news. Australian native flower, the Waratah is likened to Chinese peony, a representation of prosperity, happiness, beauty and romance.

The Gates are also adorned with many good fortune symbols. The butterfly symbolises beauty and romance. Melon, peach, and fruit of Buddha’s hand symbolise longevity and reproduction of life. Plum blossom is a sign of spring, symbolising perseverance and hope, as well as beauty, purity, and the transformation of life.

Coins are often associated with wealth. However, according to Chinese tradition, ancient Chinese coins symbolise harmony. The round shape represents heaven, and the square represents Earth.

The water pattern is a nourishing element. It is often meaning light glory and eternal. It symbolises wisdom. It represents the journey of life as it unfolds. The Chinese water pattern contains profound aesthetic values and reflects cultural significance. It also reflects the Darling Harbour landscape.

Auspicious clouds represent holiness and good luck. In Chinese, ‘cloud’ is pronounced ‘yun’, which is a homophone for ‘luck’.

The Lotus flower has the same pronunciation as the word for “harmony”. It symbolises nobility, modesty, and purity.

The colour theme resonates with the Five Elements – wood, water, fire, metal and earth – that fill the space between heaven and earth, interact and depend on each other to maintain the balance of the universe.

As you admire the Gates, enjoy 'Songs for the Gateway to the Universe’ – music composed by Andrew Zhou specifically for this occasion that quotes several Chinese household folk tunes and recalls ancient sounds and instruments. The music praises nature, reclaims life, celebrates friendship, regains energy and finds tranquillity.